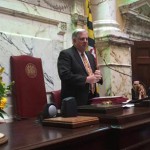 The 2015 legislative session has now come to an end. To view a list of the relevant bills that passed, please visit: odhh.maryland.gov/legislation. One particularly notable thing that occurred during Governor Hogan’s first session was that the Maryland General Assembly passed the budget in the closing hours of the session. The legislature approved a spending plan that included less funding than Hogan wanted to support the state pension fund and did not go as far as the Governor wanted in cutting down the state’s budget deficit. Hogan has the authority to refuse to use the money the legislature earmarked to preserve state pay raises, full funding for the largest school districts, and healthcare incentives. Hogan said that while he does not agree with the budget passed by the legislature, it is still a “good deal for taxpayers” because it does not include tax increases. This session featured the first divided government in eight years and also the largest freshman class in more than two decades.