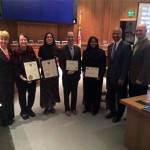 It’s a wrap for our Sixth Annual Legislative Awareness Day (LAD)! Despite it being a rescheduled event due to inclement weather, over 70 people still showed up for the event! They participated actively with questions and comments during the program. Although Lise Hamlin from the Hearing Loss Association of America (HLAA) was unable to make the panel due to illness, the other two panelists. Debra Patkin, Esq. from the National Association of the Deaf’s Law Center and George Failla, Esq., Deputy Secretary of the Maryland Department of Disabilities, shared valuable information on impacting change in both state and federal government. Kelby Brick, the panel moderator, did an excellent job facilitating the timely, relevant discussion.

Following the panel discussion, the Awards Ceremony began with keynote remarks from Lt. Governor Boyd Rutherford.  Based on votes from the community, recognition for significant contributions to the lives of Marylanders who are deaf, hard of hearing, or deafblind were given to:

Jon S. Cardin, Esq., former member of the House of Delegates, for his active support for the Deaf Culture Digital Library legislation during the 2014 legislative session, and

Donni Turner, Esq. for her contributions through the Department of Labor, Licensing and Regulation in increasing accessibility and opportunities for deaf, hard of hearing and deafblind job-seekers.

Tina Montgomery, former Director of the Centralized Interpreting Referral Service, for her commitment to creating accessibility through interpreting services for over 30 years in the central Maryland region, and

Charm Smith for her advocacy and support of the Office as President of the Maryland Association of the Deaf.

The guests then met one-on-one with their legislators to talk about issues that are important to the community. Seeing the human side of these issues has an impact on legislators. We applaud the proactive citizens that took the time to attend and open up a dialogue. That is what LAD is all about.

ODHH would like to thank the Office of the Lt. Governor, the Department of Legislative Services, the Department of General Services, the members of the State Senate and House of Delegates, panelists, interpreters, CART, volunteers, and guests for making this another successful LAD!
During Director Lisa Kornberg’s remarks at LAD, she announced that she will be retiring from State service at the end of this fiscal year, June 30, 2015.   The Governor’s Office in consultation with the Office and the Maryland Advisory Council on the Deaf and Hard of Hearing will work collaboratively to create a smooth transition.
Director Kornberg says, “Thank you for your support over the years and I look forward to continuing to be involved in the important work of the Office and of the Council as a concerned citizen in Maryland.”