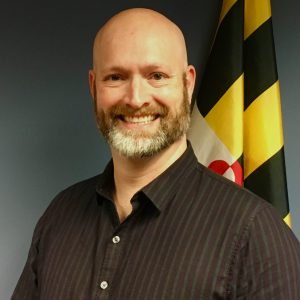 “Kelby Brick has dedicated his entire career to ensuring that Deaf and hard-of-hearing individuals have the same opportunities and access as everyone else,” said Governor Larry Hogan. “Kelby is a tireless leader and advocate for individuals with disabilities and there is no one more qualified to take the helm at ODHH.”

Kelby led efforts in 2001 to establish ODHH, and his appointment represents a “return to home” for him. “I’ve come full circle here and am excited about this opportunity to work with the governor to take ODHH to the next level,” Kelby said.

In 2013, Kelby founded Brick Advantage, a consulting firm that works with and advises corporations and nonprofits. Prior to that, he was a vice president of Purple Communications, Inc., where he led the company’s regulatory and strategic policy to break down communication barriers for deaf and hard-of-hearing individuals.

While at Purple, Kelby transformed the telecommunications relay services industry—which provides full telephone accessibility to people who are deaf, hard of hearing, or speech-disabled—by establishing a system (later adopted by the Federal Communications Commission) that enables relay equipment to be interoperable and accessible with real local phone numbers and emergency access.

Prior to joining Purple, Kelby was the director for law and advocacy at the National Association of the Deaf (NAD). As director, Kelby successfully mobilized NAD in establishing precedents and landmark decisions in litigation and legislative and regulatory areas while increasing NAD’s profile.

Kelby is active in numerous advocacy organizations and served as a board member of the American Association of People with Disabilities as well as on various federal and local advisory groups.

In 2011, Brick was the first recipient of the Governor’s Kelby Brick Community Leadership Award, which has been given annually ever since. Brick has a Bachelor of Arts in government from Gallaudet University and a law degree from the Temple University Beasley School of Law. He is the first deaf graduate of the law school. He is also a Certified Deaf Interpreter.

Kelby resides in Catonsville with his wife, Jill, and their four teenagers. 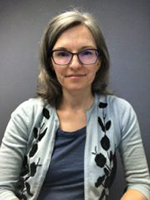 Kate Breen hails from Central New York, mainstreamed in the public school system until transferring to Model Secondary School for the Deaf for her junior year in high school. She received a Bachelor’s degree in Government from Gallaudet University, Masters in International Studies from University of Limerick in Ireland, and her second Masters in International Development from Gallaudet University.

Kate’s career paths vary from contract jobs with Institute on Disability and Public Policy at American University and United States International Council on Disabilities, worked as an ASL guide docent for New York’s Metropolitan Museum of Art and Smithsonian American Art Museum and the National Gallery of Art in the District. She also worked as a case manager for Deaf adults with developmental disabilities, managed a group home in New York, and worked as a Residential Specialist for Deaf REACH’s group homes.

Prior to Kate’s new position as Policy Manager for Maryland Governor’s Office of the Deaf and Hard of Hearing, she was adjunct instructor and faculty at Gallaudet University for five years teaching international relations courses for both undergraduate and graduate students, as well as disability history and rights for general courses requirement.

Kate is thrilled to bring her experience and skills to the Governor’s Office of the Deaf and Hard of Hearing and to work with Marylanders of all walks of life. Payal is the Communication and Policy Manager for the Governor’s Office of Deaf and Hard of Hearing. Coming from a proud Indian heritage, Payal graduated from Kansas School for the Deaf. Prior to completing her masters degree in Public Administration from Gallaudet University, Payal received two bachelor degrees in Communication Studies and International Studies from the same University.

Payal has been heavily involved in the Deaf and hard of hearing community, especially working with organizations such as Deaf Women of Color (DWC), National Asian Pacific Islander Deaf Coalition (NAPIDC), and Metro South Asian Deaf Association (MSADA). Last but not least, Payal is well known as the Chocoholic lover.